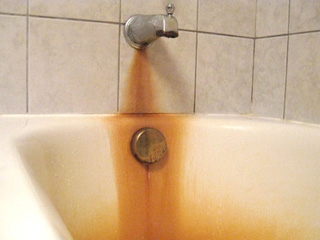 Water containing high levels of iron and manganese can be unpleasant both in taste and appearance often causing staining of baths, basins and clothes. Drinking water with elevated manganese levels can, in the long term, cause a manganese build-up in your system.

To deal effectively with these issues a large cylinder, allowing good contact time is essential with an automatic back wash valve so the unit can clean itself.

Types of treatment media and equipment will vary according to the levels of iron or manganese, type of iron, daily water usage and other water parameters. A water quality test report should be obtained to ensure the appropriate equipment is suggested.

Coakley Water Treatment manufacture a range of iron and manganese systems using different control valves and filtration media to ensure the best and most cost effective solution is available. 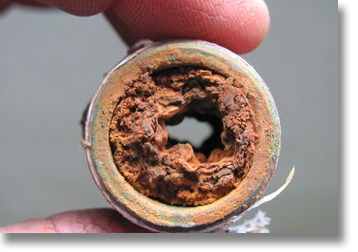 Iron is the most common dissolved chemical in groundwater from wells and springs. Although not considered to cause health problems in humans, its presence in potable water is rather unpleasant, due to the odours it spreads; its rusty taste and colour; its feel on skin and hair and its tendency to stain clothing.

In addition, the presence of dissolved iron enhances the growth of iron bacteria, which forms dark-coloured slime layers on the inner side of a system's pipes. The slime is then released into the network through water flow fluctuations, leading to dirt build-up and damage to the plumbing.

Manganese is a mineral, naturally occurs in rocks and soil and may also be present in groundwater. Manganese is seldom found in isolation in a water supply but is frequently found in iron-bearing waters. Manganese may become noticeable in tap water at concentrations greater than 0.05 milligrams per litre (mg/l) by imparting a colour, odour or taste. However, negative health effects from manganese are not a concern until concentrations are at levels approximately 10 times greater at 0.5 mg/l and above.

NB: Where pH level is low, a pH correction unit should be fitted before this unit to bring the pH up to neutral.

Where water appears clean at source but discolours when standing, an aerator unit may be necessary.

Please email us at info@coakleywater.ie for a free quote on a system to suit your requirements.